Welcome to the Alpine Marmot Project

We all experience aging, a process also known as senescence. Today it has been established that some living organisms, like certain bacterial strains as well as freshwater polyps, do not present any apparent signs of aging, however most organisms have clear signs of decline with age. Senescence is an incredibly complex process and surprisingly variable from one species to another and even from one individual to another. For example, recent studies have shown that birds have a much greater longevity than mammals and they age less quickly. Moreover, in many mammals, including humans, the life expectancy of females is higher than in males. Senescence of reproductive success (the number of young who survive long enough to reproduce) differs greatly between the long-living species of marine birds. With the Grand Albatros, reproductive success increases progressively between the age of first reproduction (8 or 9 years old) and 12 years, and then gradually declines between age 12 and 25/30. However in the Snow Petrel, reproductive success greatly increases between age 5 and 10, but does not decline with age. What causes these differences? What is the role of genetic factors in these changes? What share of these changes is due to environmental factors, especially the conditions at birth or the social context? What evolutionary theories could explain these changes?

The very detailed data collected over the past two decades of the population of marmots in the Grand Sassière research site trace the life of more than a thousand individuals from birth to death. These exceptional data have already allowed researchers to find patterns of senescence in the Alpine marmot. Analysis of these data has allowed us to show that in this case, the senescence of body mass has mixed sex patterns. The males are starting to age earlier and more significantly, gradually losing weight from the age of 8, while we have not seen this phenomenon in the body mass of females. Males are also subject to mass weight loss (about 5% of body weight) in the year preceding their death. This gender difference may come from strong intra-sexual competition between males. Dominant males must both monopolize reproduction and defend their territory against intruders. When males age, their weight decreases, which reduces their ability to maintain their dominant status. Alternatively, the male-lead role of social thermoregulation during hibernation could be an explanation to explore (see Tafani et al., 2013, Oecologia). This study raises many questions about the role of sociality but also gender differences in the approach to studying senescence. 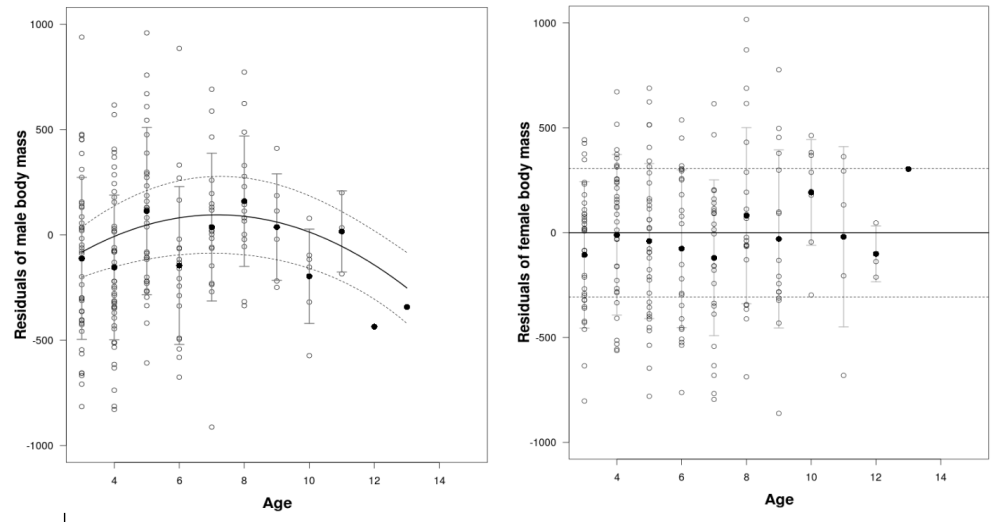 The analysis of these high-quality data also help to highlight patterns of senescence which differ greatly depending on key components of reproductive success such as litter size, weight of each of the young, and total weight of the litter. Indeed, the weight of the litter, and thus the total reproductive investment by the females remains constant until they reach 10 years of age, and then declines in older females. However, while litter size, and therefore the number of young produced, follows the same pattern, the weight of the pups and the quality the quality of the pups produced remains constant throughout the life of females. Therefore, in the Alpine marmot, older females reduce their total reproductive effort (measured by litter weight) by reducing the number of pups produced without reducing the quality of each pup.

Senescence patters in social species (those whose members live in groups beyond the breeding period and show strong cohesive interactions) are particularly intriguing. Comparison of closely related species suggests that social species have increased longevity compared to solitary species. For example, comparing solitary and eusocial insects shows that the evolution of eusociality has multiplied the longevity of these eusocial species immensely. Eusocial insects, such as ants, bees, and termites have a life expectancy of ten years, six years, and twelve years respectively, while solitary insects such as beetles, dragonflies and flies have a life up to one year. The mole rat is another striking example of this longevity. This eusocial species has the greatest longevity in rodents (over 28 years), which is eight times higher than that of the gray mouse.

Finally,in social species, individuals exhibit great individual variability in their patterns of senescence, variability which is partly explained by the social status of individuals. Among bees, the workers have a much faster rate of senescence than the queens. Indeed, while the queen leaves the hive only for mating flights, the workers can have more than 10 flights per day. Therefore, only the workers are exposed to a high risk of mortality resulting from both physiological exhaustion and exposure to varying environmental conditions. With the meerkat, a coopertive breeding species, the dominant individuals have a longevity three times longer than the subordinates. Does sociality allow the dominants to delay the onset age of senescence and decrease the intensity? Does sociality help to increase the life expectancy of individuals at the expense of other individuals?

A number of questions and challenges remain in understanding senescence in social species. Among the open questions which remain are: how do the environmental and social factors to which individuals are subjected between their birth and death affect how they age? How do the patterns and rates of senescence affect the fitness of individuals and populations? The road is still long before we can understand all the causes and consequences of the senescenece process, but The Alpine Marmot Project offers a unique opportunity to answer these questions.