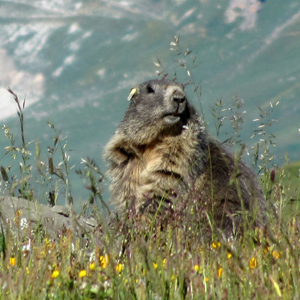 Welcome to the Alpine Marmot Project

The Col du Lautaret (2,058 m.a.s.l (6,752 ft)) is a high mountain pass in the department of Hautes-Alpes in France. It marks the boundary between the valleys of the Romanche and the Guisane, a tributary of the Durance which has its source at the col. The valleys are linked by national route 91 (Grenoble – Le Bourg-d’Oisans – Briançon). The Lautaret is one of the lowest points on the ridge line which separates the “north” (mainly in the Rhône-Alpes région) and “south” (mainly in the Provence-Alpes-Côte d’Azur région) geographic areas of the French Alps. The Col is open all year round and provides good views of La Meije to the south-west and the Grand Galibier to the north. It is also well known for its botanical garden at the Station Alpine Joseph Fournier (SAJF). The route to the south side of the Col du Galibier leaves from the Lautaret.

The climate is typically alpine.  Average temperatures are low, there are great fluctuations in weather daily and over the course of the year, and significant precipitation.

Differences in altitude and aspect encourage highly diverse vegetation. Included among the plant life are mediterranean, subalpine, alpine, and nival flora. It is considered particularly rich as regards plant life, and it contains many plant species rarely encountered in France.

The fauna includes many species emblematic of the Alps such as the chamois whose latine name is Rupicapra rupicapra, or the Ibex, known scientifically as Ibex ibex.  Other species which are predators of the alpine marmot are found here as well: including the red fox, Vulpes vulpes, and the golden eagle, Aquila chrysaetos. Cattle and sheeps continue to graze on the slopes.

Marmots occupy the valley from the lowest elevation to over 3000 m up on south-facing slopes. The population of this valley is not an isolated population, but is probably part of a wider community including the lower slopes and adjacent valleys to the South, East and North.

The study site encompasses three populations: Lautaret, Roche noire and Galibier with contrasting environments. Lautaret (2,058 m.a.s.l ) is where the snow melts earlier in the season and Galibier (2,645 m.a.s.l.) is covered with snow later, this leads to delayed plant growth and to a  shift in the annual cycle of the marmots. 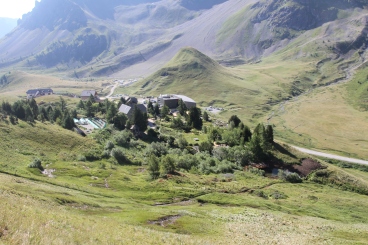 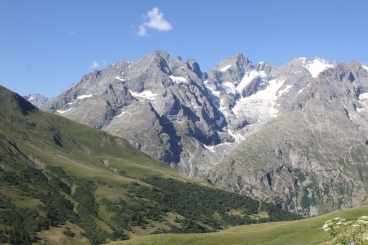 The map of the marmots’ territories and the composition of their family groups are accurately known and updated continuously. 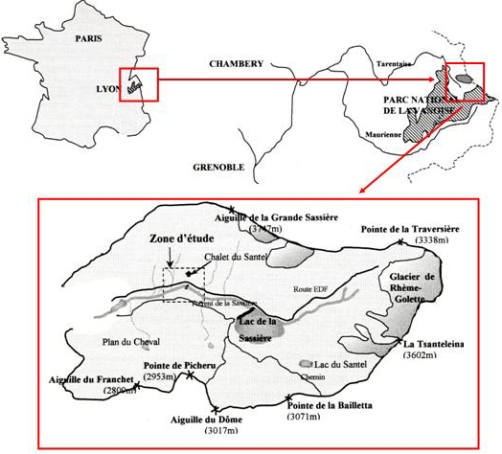 Our former study area was located in the western part of La Grande Sassière reserve (45 ° 29’N, 6 ° 58’E) in the Tarentaise Valley near the township of Tignes (Savoy).

Since 1990, 26 family groups of marmots had been studied, and all were subject to intensive monitoring. They were divided into three area according to three exposures to the sun: the side facing South, the side facing North and the bottom of  the valley. The sunny south side corresponds to the first slopes under the needle of La Grande Sassière, the bottom of the valley corresponds to the grassy expanses located between the trail and the river which crosses the valley floor, and finally the shady north side is located on the northern side of the dome of Picheru. The north-facing side is covered with snow later, this leads to delayed plant growth and to a  shift in the annual cycle of marmots.

The map of the marmots’ territories and the composition of their family groups were accurately known and updated continuously. The population seemed to have reached saturation level in this area.  Only three new territories were created by splitting existing territories between 1990 and 2005. 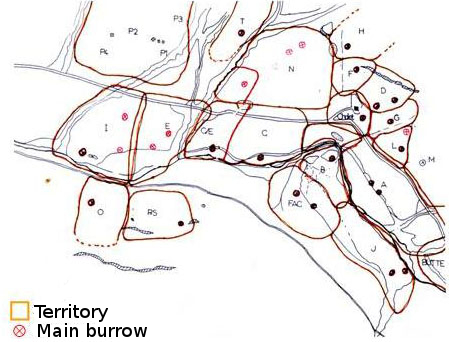